The great city of Melbourne was founded on August 30 1835, less than two years later one could have stood on the corner of Collins and Queen Streets and, through the gum trees, looked upon the site where the Mitre Tavern now stands.

Sir Charles Ebden, previously an eminent citizen of Sydney attended a land sale in June 1837 and bought allotments 5,6 and 7 of Block 14 which gave him frontage of 3 chains in Collins Street and which embraced the Mitre Tavern site, all this for the princely sum of £136.

Two years later, Sir Charles sold the land. The Bank of Australia bought a part and the rest was subdivided. In that subdivision provision was made for what is now Bank Place.

On one of the lots facing this lane a private home was built, the owner is no longer known but the two-story structure is now called the Mitre Tavern and is (as documented by the Melbourne City Council) the oldest building in Melbourne.

In 1868 Mr Henry Thompson became the first of many publicans at the Mitre Tavern with his successful application for a Liquor License. Under a succession of licensees it has remained a Tavern for nearly 140 years.

The Melbourne Dog Club had its inaugural meeting and many more in later years at the Mitre Tavern. The patronage of hunting, coursing and racing men made a sportsman’s rendevous of the Mitre and we find the first Victorian Polo Club, regularly meeting there. Names perpetuated in many Victorian streets and towns were on the membership list – Sir Redmon Barry, Captain Standish, Robert Power, Reginald Bright, Finlay Campbell and Edward Fanning among them. 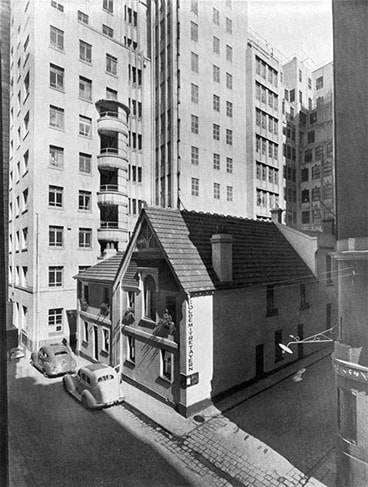 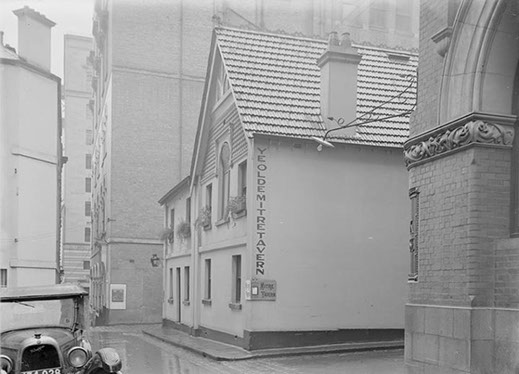 Then, as now, the courts and officials of law were to be found in the vicinity and from nearby Temple Court and Chancery Lane came distinguished patrons. Sir Bryan O’Loghlen, J.L. Purves, K.C. Charles Miller and Walter Coldham all knew the Mitre well.

The little tavern stayed as the city grew and, in 1923, an order was issued that six bedrooms be added, the kitchen renovated and the words ‘Accomodation for Visitors’ be painted on the front wall. The licencee contested the order maintaining that the number and quality of the meals served there compensated the lack of accommodation and that altering the building would be an act of vandalism. Fortunately the licencee’s appeal succeeded.

In 1930 a huge crowd of bidders attended an auction which saw the Tavern passed in at 22,250 pounds. It was subsequently bought by the Royal Insurance Company which planned to demolish it to make room for additions to its Collins Street building.

The Mitre stubbornly hung on until 1937 when the Company had a change of heart and reprieved the little inn again. Mr W.K. Fethers, then Manager of the Royal Insurance Company, described the Tavern’s Gothic façade as a splendid example of the architectural period. He was supported by a contemporary newspaper which said the Mitre Tavern is an architectural gem and a relic of the pioneering and hunting days.

Few people who enjoy the ales here are aware of the fact that this cosy cottage style pub spawned the name of the Mitre 10 hardware chain. Two of the founding members were drinking at the Tavern when inspiration struck: 'mitre' is a hardware term. The '10' - well, it had a nicer ring to it than Mitre 2.

Across the road from the Mitre stands the Savage club, which was built by Sir William Clarke, Australia’s first baronet. The Mitre’s connection to The Clarke family is a bit unfortunate with Sir Rupert Clarke’s mistress, Connie Waugh, said to have hung herself in the Mitre. Her ghost is believed to have been seen, haunting the rooms and halls of the tavern even now.

Today, the venue that was a base for hunting the many deer that roamed the nearby bush has become patronised largely by business people looking to escape the rush of the city or to enjoy a fantastic meal upstairs in the newly refurbished Steakhouse.